|  The Daily Couture: Taylor Lautner’s Abs Aren’t Even His!

The Daily Couture: Taylor Lautner’s Abs Aren’t Even His! 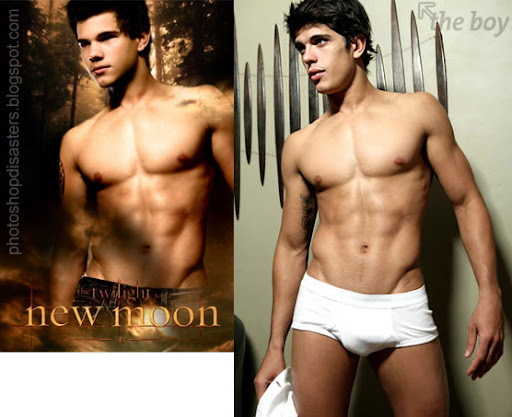 Sorry to disappoint you, Lautner fans, but it turns out that Taylor’s trademark Really Hot Abs belong to another dude (allegedly!), who is way hotter, in my opinion. In posters for Twilight New Moon, it seems like Taylor’s abs were totally Photoshopped from the hotter dude. Sheesh, as if he needed that much more abage. They should have Photoshopped his package, while they were at it.

See? Men have image issues, too. I just don’t understand why some people are so obsessed with models and body issues. Obviously some models are way too thin and the industry should do something about it. But you know what? I don’t think we hold ourselves accountable enough, either. Folks need to realize that nobody will ever look like a model, no matter how much you try. A model is only an “idea.” It’s not real. I’m not being cheesy with the “You Can Only Look Like Yourself” bit. I’m saying that models have an army of people – stylists, make-up artists, hairstylists and Photoshopists – to make them hot. Not even models look like models and in this case, not even Taylor Lautner is Taylor Lautner!