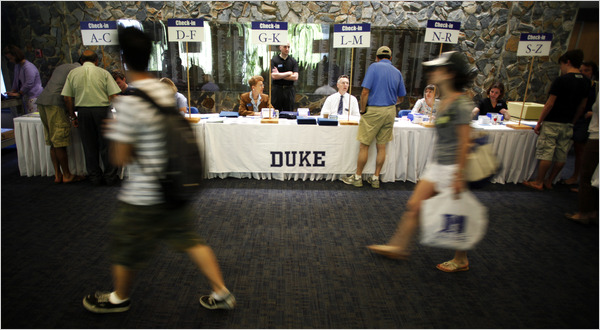 High school seniors hoping to secure a spot off a college waiting list face overwhelming odds this year, according to an article in The New York Times on Tuesday.

Top tier colleges such as Duke, the Massachusetts Institute of Technology and Dartmouth have all increased the size of their waiting list pool amid the surge in applications and growing uncertainty among admissions officers about which admitted students will matriculate.

“I have no idea what I’m going to need to finish sculpting the class,” said Christoph Guttentag, Dean of Undergraduate Admissions at Duke University in an interview with The New York Times. “From an institutional perspective, it’s important that I have some flexibility.”

Duke, which saw its applicant pool surge by 30 percent this year, has waitlisted 3,383 students — almost double the size of its incoming freshman class. Guttentag added that his office simply did not have enough time to whittle down the wait list pool amid this year’s record application numbers.

Despite a slight dip in applications, Yale has also increased the size of its waitlist pool to 932 students this year, compared to 769 last year.