A match made in Harkness 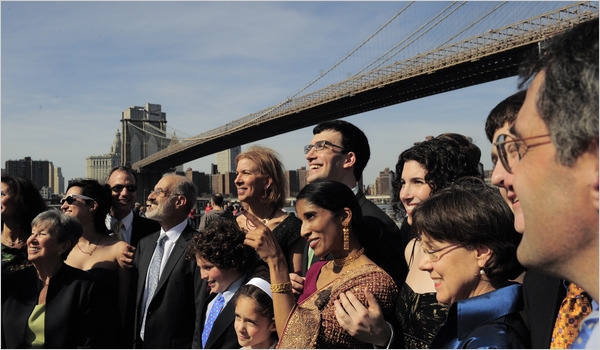 Perhaps the Branford courtyard would have been the perfect setting for the wedding of Michael Gelfand ’01 GRD ’01 and Arundathi Jayatilleke ’01 GRD ’01: The two Yalies, who instead wedded last Saturday on the Brooklyn waterfront, met at carillon practice for the Guild of Carillonneurs when they were sophomores over a decade ago, according to this week’s New York Times “Vows” column.

Though they didn’t start dating until a year and a half after that first carillon practice, Harkness Tower was the site of their first encounter as well as their budding relationship, as Gelfand and Jayatilleke became carillon partners during the junior year. (Once, Jayatilleke charmed her future husband by playing a carillon version of Led Zeppelin’s “Stairway to Heaven,” resulting, as the Times reported, in “an explosion of hard, fast rock, which on a carillon is nearly synonymous with cacophony.”) They were also both studying for joint bachelor’s and master’s degrees in molecular biophysics and biochemistry, and both loved “The Simpsons.”

But Gelfand was apparently too awkward to make a move, while Jayatilleke was too shy. Whatever would they do?

Read the column for the full story of how they finally embarked on a relationship, stayed with each other through the ensuing years of graduate school and got married. (Hint: There’s a Super Bowl party, a misdirected instant message and Buddhist chanting involved. No bells, though.)