C’est une épidémie! You know obesity is a serious problem when the French are worried about it. According to The New York Times, in 2005, 11.3 percent of the French are obese and nearly 40 percent overweight. You can just imagine the numbers for 2010. 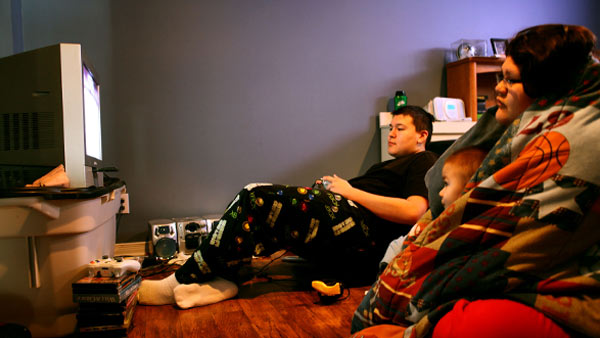 That brings us to France-based Honkytonk Films’s new Web documentary “The Big Issue,”* a look at the globalization of unhealthy foods. This interactive Web presentation goes to the community level, examining the impact of fast food and poor eating habits in northern France, low-income neighborhoods in Los Angeles and a Mohawk reservation in Canada.

You meet a patient undergoing gastric bypass surgery (blood and guts included), a family eating at McDonald’s who doesn’t consider fast food to be unhealthy and a thirteen-year-old girl with high cholesterol. When the opening scene warns “L’Humanité grossit” (“Humankind is getting fatter”), the filmmakers are not kidding.

“The Big Issue” is unlike the traditional death-and-doom documentary about obesity. It isn’t Ameri-centric like “Super Size Me” or “Food, Inc.” While it points fingers at major food industries, it also blames more abstract problems such as socioeconomic inequality and erosion of cultural traditions.

But most important, “The Big Issue” isn’t just some documentary you pop into your DVD player: it forces you into the shoes of the filmmaker through the genius of its interactive layout. You get to choose the people you interview and what questions to ask. In a way, it’s like those books with multiple endings. And in a way, it’s not — no matter where in the developed world you go, obesity resounds like a death toll.

One of the solutions “The Big Issue” advocates is that we should be more connected to the food we eat. Even if it means growing it in our own garden. Last week, I was fortunate enough to visit Common Ground High School, a magnet school in New Haven that has its own urban farm. (I even got to weed by hand!)

Not only are students eating the vegetables they grow for lunch, but they also take classes about food production and nutrition. Despite seeing the urban landscape drenched in grease in “The Big Issue,” I am a bit hopeful after meeting with educators close to come who are encouraging healthy eating.

*There is an English version of “The Big Issue” for us non-Francophones.