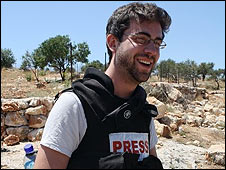 Jared Malsin ’07, the English language editor of the Palestinian Maan News Agency, has been detained by Israeli security officials at the Ben-Gurion Airport near Tel Aviv since Tuesday, when he tried to enter the country after arriving in Israel on a flight from Prague, the Associated Press reported.

Israeli officials are accusing Malsin of lying about his reasons for wanting to enter the country, and for overstaying his visa in Israel on several previous occasions. In response, the Maan News Agency asserts that the arrest was retribution for Malsin’s reporting on Israel. A court hearing scheduled for Thursday has been put off until Sunday, the AP said.

Malsin is a Berkeley College alum from Hanover, N.H., and he graduated in 2007 with a bachelor’s degree in political science. While at Yale, he wrote a regular column for the News, “Coalition of the Illing.” According to the AP, Malsin is Jewish.